How About Free Sunday Transit 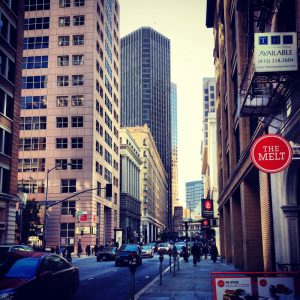 “Why is public parking free on Sundays but public transit is not?” said @ptraughber on Twitter the other day. I couldn’t help but fume about this very question as it seems a strange injustice to give away (subsidize) public space to vehicles. There are many societal implications here, such as that people who drive deserve a “break”, that we value the leisure time of drivers, and that we’d prefer weekend activities to occur by car.

We know in general people do less on weekends as a result of our modern work week.  Free Sunday parking still exists in cities like Chicago, Seattle, and mostly in San Francisco.  I’ve always known it to be a fact in the Twin Cities growing up, and overhearing the same in most major cities.

I was unable to find the origins of it, but it seems common sense, even if not fiscal sense.   Quora offers that it’s merely a byproduct of the fact that parking enforcement don’t typically work on weekends and most businesses are closed. This may be perhaps true in the earlier car era when Sunday was more religiously observed. I always thought it was meant to encourage retail visitors on Sundays, especially for downtowns competing with suburban malls.

Cities are slowly recognizing that free weekend parking doesn’t make sense.  Though this cause has more to do with finding untapped revenue sources than good planning.   New York dumped it in 2005, then Los Angeles in 2008.   Portland later followed charging for parking during weekend prime times it identified as 1pm to 7pm.  San Francisco tried to charge in 2013 but Mayor Lee abandoned it after a year supposedly pushed by churches.   In many cases cities will charge meters near special events and venues since its likely running police enforcement for those activities.

In this technology era, personal cars are being de-emphasized in dense urban areas.  There’s hardly frontage left for street parking with transit-oriented development rules that limit such frontage and require on-site parking facilities.  Demand for meters may be less on Sundays, but it’s still significant funding for strapped local governments.  Local businesses are cool on the topic, any business obviously wants easy access for patrons but is increasingly understanding that dense, pedestrian-friendly and transit-rich areas deliver far more visitors than a few single-driver spots on the street.  Plus, we want parking overturn.

It seems strange that it’s difficult to say we’re “giving away” something to the public, when we do so with parking.  The streets are owned by us too, right?  Though I can see where given the soaring capital costs of transit improvements, having no farebox recovery seems financial wizardry.

The concept of specifically Free Sunday Transit doesn’t seem to exist… yet.  Athens, Georgia piloted a month of free Sunday transit this year to promote the new weekend service but it didn’t quite catch on.  Free Christmas, New Year’s or Thanksgiving service is indeed something, but the advocacy for that stems more from getting drunk people home than a public tusen takk.

Ironically most transit systems offer plenty examples of no or limited Sunday/weekend service on certain routes.  There exist a small contingent of free transit agencies mostly offered in small towns and cities under 100,000 in population.  Nearly all university shuttle systems are free for students (TCRP Synthesis 78).

People may argue about the pros and cons of fare-free transit, but none of the literature reviewed for this project questions the fact that ridership will increase when fare-free policies are implemented. No matter what types of experiments, demonstrations, or permanent programs have been implemented, public transit systems have experienced significant increases in ridership when implementing fare-free policies. (TCRP Synthesis 101 Page 13)