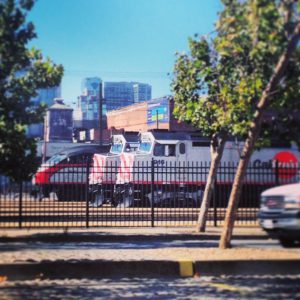 Shaun Abrahamson of Urban.us detailed a list of “Pop-up Mass Transit” startups operating now.  From a VC perspective, he’s concerned about how game theory will make or break their mobility promises.  Can shuttle startup A beat out carshare startup B on price and retain users when the true cost of providing these services becomes reality.

I couldn’t help but think maybe transit-like startups should be concerned about their actual role in transportation and urban planning.  What niche do they serve in the transit ecosystem, not necessarily that one can get from point A to B.   A city is inherently multi-modal, with different ways of getting places and the messy synergy between these paths.

Transportation startup’s should aim to merge into the existing transit fabric, not simply create an overlay or new “platform.”   Lyft boldly pushed it’s “Friend’s with Transit” stats out there to show that between 20-33% of all rides start or begin at a transit station in DC, Chicago, San Francisco, Boston, and New York.   If a third of your business is generated by other transit, that’s not just economics, it’s good urban planning.

Greyhound was the original startup in this category, providing low cost bus service between cities especially as Amtrak dismantled itself through the ’80s-’90s.  Megabus jumped in before iPhones were even a thing and now we have plenty of similar “coach” services especially in Midwest and Northeast corridors.   Tech startups of course want to give you the power to provide or at least discover these services instead of running the buses themselves.

The true difference between these tech startups and a typical coach service is that the coach services are focused on capturing riders in specific transportation corridors.   Rallybus and Buster require complex itineraries, compared to BestBus or Wanderu. These itinerary costs are also a little opaque and it’s hard to quickly search a route or the routes are customized.  So they succeed in very unique travel situations while Skedaddle lets one discover and compare costs more quickly.  Contrary to that, apps that are essentially rideshare boards have a hard road ahead because coach services are already fairly low cost, guaranteed rides with more amenities than someone’s car.  And even luxury car drivers will be hard to compete with the highly booked Royal Sprinter.

Intercity travelers must inherently spend more time to plan and consequently more time to compare, that is something startups will need to address.