From San Francisco to Washington D.C. 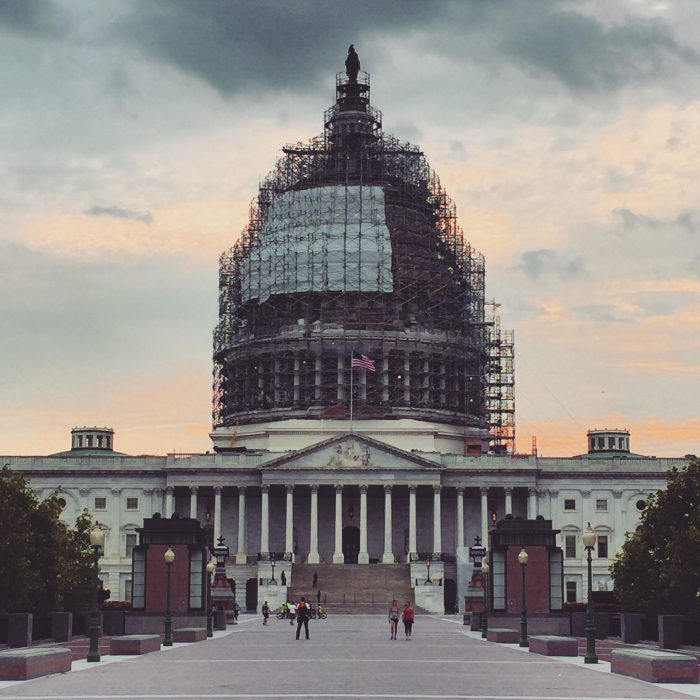 It’s been a week here in the beautiful, sunny, and humid District of Columbia (slash Arlington, Virginia). In all my years I have never been to the nation’s capital and it’s odd to finally see it all in real life. Washington D.C. is often cited in foundational urban planning and geography courses given that it was one of the earliest grand endeavors to fully plan an American city. L’Enfant’s plan introduced French sensibilities and diagonal avenues into our austere grid system.

The internet is full of delicious historical tales on the controversy of D.C.’s city plan so I won’t try to pretend I’m an expert on this.  For the most part, the city still maintains the Baroque underpinnings of ornate architecture, spacious gaudy plazas, and grand wide avenues punctuated by scenic vistas. (“Dresden: Making of a Baroque City” by @ralphharrington). Turning a corner, I’m awestruck by the rising Capitol (covered in scaffolding), neatly centered on spacious Pennsylvania Ave. Even small statues like Dupont Circle bring about a sense of wonder and folly. I thought I’d be giddy about the traffic circles (roundabouts in MN lingo), but they’re very wide and thus well integrated so they don’t seem so unusual or revolutionary anymore. 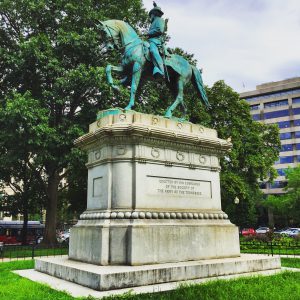 McPherson Square and Mr. McPherson himself. The square is a transit hub terminus for buses.

I can understand why the West Coast’s Pan-Pacific heritage draw upon Baroque styles and philosophy. The Hogwarts-esque Old Post Office with its Romanesque Revival entryway and clock tower is like many early 20th century towers in San Francisco or Berkeley. The Capitol vista especially reminds me of the Ferry Building. However, as appropriate a design for a federal city, it certainly does not do well for street life.  The streets are perhaps too grand and wide for the pedestrian, and the revival architecture has a foreboding fortress feel.  The closer you move to the National Mall, the more the rising building scale seems to isolate a person.

So I split my days between these granite symbols of our country’s permanence, for the green, tight-knit neighborhoods of D.C.  Interestingly, the row houses here are about as wide (or shall I say squished) as those in San Francisco. A single-family walk-up is a door and four windows.  What’s interestingly absent in D.C.  are vernacular architectural styles that yielded colorful Alamo Square Victorians and Italianate apartment buildings.  Perhaps the 1906 Earthquake had something to do with it, a need for San Francisco to prove itself after literally being leveled. D.C.’s housing on the other hand reflects its relatively early working class upbringing, with the good stuff focused in only particular neighborhoods that served the powerful (“Struggling over history in a gentrifying D.C.”). 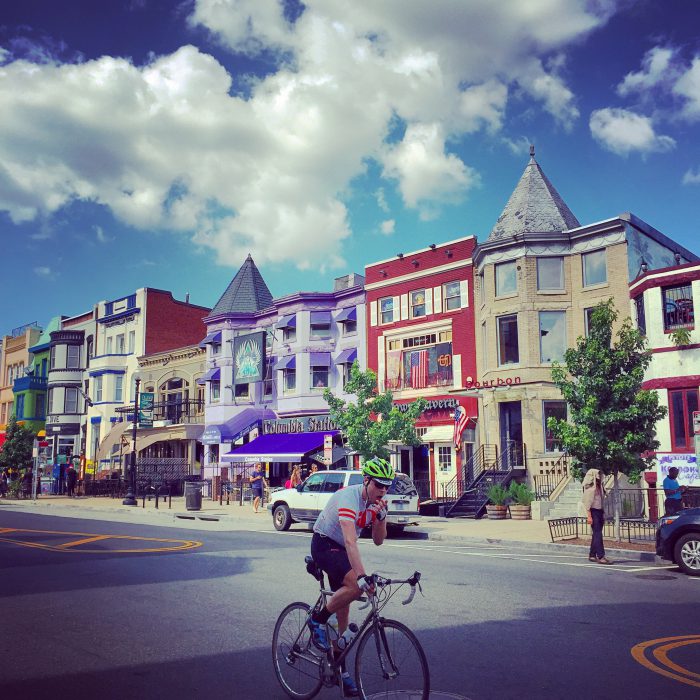 Adams Morgan. A Haight Ashbury with actually interesting businesses and unique food. Also the freshest empanadas I’ve ever had.

The neighborhoods have impressed me. They’re sort of a goldylocks between Portlandish and Los Angeles attitudes. The affordable streetcar-era retail spaces allow for gentrifying small bites, coffee, and dessert shops.  Plentiful trees and parks highlight well done streetscapes and sidewalk designs.   There’s also plenty of mid to high-end restaurants with well-crafted concepts situated amongst all this.   And not so surprisingly, these neighborhood centers completely ignore L’Enfant’s plan, situating themselves arms reach out of main drags and transit hubs.  I don’t really see a San Francisco effect in the near future, so hopefully there will remain something refreshing here for everyone. 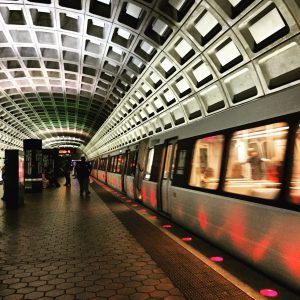 The glowing red orbs of the Eye of Transit keep those government workers complacent.

As for transit, I was very impressed. Everyone likes to talk sh*t about their own transit system. I’m amused by unsuckdcmetro because compared to BART, their system is light-years ahead in terms of capacity and service.  DC Metro is ridiculously convenient (stations every 2-3 blocks) and goes about just everywhere relevant.  It’s stations are immaculately clean and people orderly move about.  BART may win the award for frequency and on-time service, but after riding Metro for the first day, I realized I’d rather have a built-out subway system over a single packed line.