Geography of Nowhere Remains Relevant for the New Urban Age 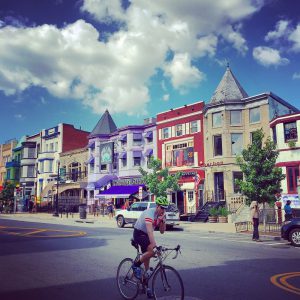 James Howard Kunstler’s Geography of Nowhere was published in 1993 but it’s view of our current urban landscape remains just as relevant today.  Kunstler is a journalist turned urbanist critic, much like Jane Jacob’s, and along with his damning treatise on our car addiction regards him as a popular pundit than expert in the urban planning community.   He’s often on university reading lists but perhaps his observations are not so highly regarded by high brow scholars (he has choice words for bad planning).  Kunstler’s TED2004 Talk on “The ghastly tragedy of the suburbs” has 1.4 million views, so perhaps one day we’ll regard him to Jacob’s pedestal.

Kunstler explores all the quintessential historic iterations of American bedroom “communities” using examples in his native New England from the early 1900s to today.  From Olmsted’s Downton Abbey-like Riverside, Illinois to the nowhere suburban K-mart parking lots of outskirt Anytown USA (hence becoming Nowhere USA).   His example of Woodstock, New York’s co-opting by wealthy outsiders struck me as the modern story of the 2010s.    From an actual town that self-sustained itself through farming and crafts, it is now a hollow reflection of that, propped up by the typical food and boutique service economy.  It’s new role as pseudo-historic well-to-do suburb makes it feel like the Atlantic City boardwalk of an earlier chapter.

A socioeconomic critique of shopping mall’s and their shaky public-private domain predicted exactly something the Black Lives Matter movement exploited recently at the Mall of America.  He harkened to Vietnam and questioned what would happen if towns lacked actual places of public assembly.  Sometimes a democracy needs to express itself, and if that voice is eager it will go wherever that may be.

Kunstler also might not like millennials of today and would see gentrification as the Manhattan executives of his age.  Americans love to move around, it is perhaps built into our genome from Manifest Destiny.  But problematically, we seem to abandon places we deem boring and “nowhere” instead of sitting put and actually improving them into places we care about.   So if young people flock to San Francisco for it’s Pan-Pacific revival and high-density, high-style architecture of a long-gone era, how soon will San Francisco also become like Nowhere USA with Apple stores, Trader Joe’s, and Crate and Barrel (Site Note: I love all of these stores). 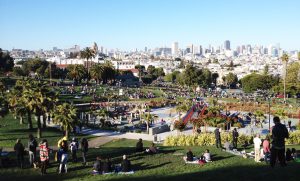 My Instagram of a perfect (and intentionally designed) vista at Dolores Park. This shit doesn’t happen anymore.

So now what Kunstler? How do we get out of where we are.  Even in 1993, the condition of physical America was drab and deteriorating from infrastructure to housing.   He does point out zoning as a major cause and obstacle to restructuring the urban landscape.   From there, he explores neo-traditional architecture such as Duany Plater-Zyberk and celebrates Seaside, Florida.  Though perhaps his true longing are the Gilded Age planned towns and cities of the early 1900s where Irish servant girls ran the house while you took a train to your factory. The book’s main critique is that we’ve lost our vernacular language of how to plan for communities. Unfortunately we can’t revive urban planning as a design practice given the current regulatory, political, and even intellectual structure of Design with a capital D.

For now, planners and developers contend with poor tools of “infill” and “redevelopment” to renew their communities. The Robert Moses’ age is over, but master/small-area plans and zoning overlays are quietly changing the urban fabric toward communities “worth dying for” as Kunstler would say.

I think there’s a silver lining when he laments the loss of connectedness. Today we are far more connected than the 90’s ever imagined. These “cyber” connections are manifesting in the real world. Developers don’t have to try hard to figure out why people want to live in dense urban areas (cities) again. Some architects are actually giving a damn about the street such as Jan Gehl and others are creating inspiring ecology-minded structures like Bjarke Ingels. Through social media, we’re seeing the world’s transit rich cities on a daily basis, and so grows our eagerness to bring that infrastructure here. While Kunstler may still grumble about the socioeconomic realities of an entire country drunk on a service economy, there is at least consensus that we will need to move to sustainable place-based industries soon.