Nicollet Mall is Not the Destination

The announcement of architect James Corner to work on the Nicollet Mall redesign finally signals the city’s movement on upgrading the aging city centerpiece.  Minneapolis has discussed replacing Nicollet Mall for quite some time mostly due to its crumbling condition.  The rectangular fountains which I once enjoyed as a child are no longer.  The colorful sidewalk pavers are coming apart, and it’s configuration is generally outdated, outmoded given the changes in many of the storefronts which now focus on bar patios than affordable interesting retail.  The Mall isn’t really a mall anymore, it’s a fancy zone of transition, to get from the bus to the office, the train to the hotel, or a bar hopping corridor. 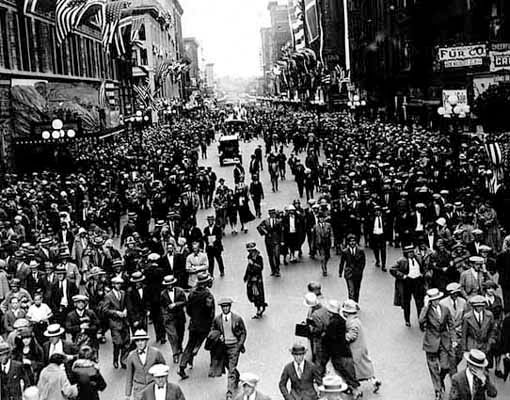 Once upon a time: Nicollet Ave after the Norse-American Centennial Parade in 1925

Corner has thankfully listened to the actual needs of how people actually use the Mall, as a pathway to the river and importantly as access to the skyway.  Nicollet Mall is really just Nicollet Avenue, a central thoroughfare that serves critical commerce and business in the State, if not region.  However, the vision presented by the final design candidates overall is not exactly fitting with Minneapolis, let alone the Twin Cities or Minnesota.  There will never be hordes of people congregating in a square block, lest the government has been overthrown. Street events are few and far between, and preferred in neighborhood settings anyway.  It’s not even really wide enough to put a full parade down it (Holidazzle doesn’t count).  The fact is, Nicollet Mall has never been the destination, it’s the uses around it that are the penultimate arrival.

In cities like New York, you can build an urban public space anywhere and people will flock en masse because there is such a craving and need for it.  Corner’s Highline is simple and unobtrusive, it needed no special flair.  On the other hand the context of the Twin Cities is that it was planned with leisurely standards of wide public roads, lush tree canopy, and plentiful parkland.  Fly overhead during warm months and all you see is a sea of green with skyscrapers mulling about. So for Nicollet Mall, there is really no reason to overemphasize nature or congregating, Minneapolitans are adept at finding green places to loiter in the City and need no special proof of it.  Take a failing example of the Minneapolis Federal Courthouse plaza where grassy nature mounds are ridiculous and unused.  It hasn’t made that public space any more appealing or grand.

The direction of Corner to move with thematic areas of “live, work and play” is a right direction, as homages to Portland’s transit mall “rooms.”  The difference is, Tri-Met built those public spaces, not the City of Portland, and so their purpose is ultimately movement and flow.  Simply creating arbitrary urban spaces on Nicollet Mall after some kind of theoretical theme, does not create a good design.  The heyday of the Mall as a retail cathedral reflects the shopper’s feeling of being there for what is around there, what abuts it.  The street emphasizes the buildings, not the other way around.  To focus on revitalizing Nicollet Mall, is inherently to revitalize the business and activity that relates to it.  Bricks and mortar are stepping stones, those post-modern art sculptures and curved architectural seats simply serve to move you to the next stop.  Misunderstanding Nicollet Mall’s redesign as purely civic destination will ultimately destine it to a future redesign and not effectively serve Minneapolitans now.

Corner should focus on connectivity as an overarching theme because that is what has made the Mall ignored and confusing today. Even long-time Twin Citians strolling along will invariably become annoyed at how the street “gives up” at either ends. The Washington Ave terminus is a sea of empty lots, as if it were a wasteland of Greek ruins punctuated by Minoru Yamasaki’s ING temple. The southern transition to Steven’s Square and Loring Park is tepidly marked with faceless modernist fortresses, as if one were not meant to step beyond Grant Street. The many numbered Streets of Minneapolis sharply cut into Nicollet Mall without looking back. It is a pity city planners never enforced building corner setbacks. Improving these interfaces to the great Main Street will ensure in the long-term whatever Corner produces for the next generation will continue to be admired and used.