On Being a Transit User 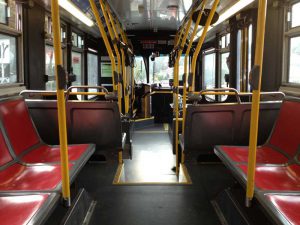 During my Masters program, I pondered the life of a transit user, specifically someone who uses transit as an exclusive mode of transportation. If cities are on this push to reimagine themselves as transit-oriented communities, then why is it so much of its eventual design and implementation never concerns people.

We know the demographics of the current transit “community” has users that are mostly poor, below median earnings. (see Governing’s Public Transportation’s Demographic Divide by @mmaciag). A point missed is that transit users are actually working, they’re employed, and so it seems under-emphasized that transit users use transit to get somewhere.

Transit design is typically utilitarian and lowest-bidder, yet the systems themselves lack utilitas or expediency, and add unnecessary costs. A great example is Metro Transit METRO Green Line. The current running time between Downtown Minneapolis and Saint Paul is 46 minutes, but typically more, given badly timed stop lights. The concept of the line succeeding the former streetcar line was bizarre, because the streetcar’s actual successor is the 16 bus. Streetcars are meant to stop frequently, maneuver with traffic, and are subject to obstacles. Light rail, the low-cost subway alternative for underfunded metropolitan transit agencies, is better categorized as “medium” rail for its ability to provide capacity movement on long distances. It shouldn’t be running with traffic and yet Green Line not only constantly pits it against traffic for most of its travel length, but succumbed to community (lawsuit) pressure to add unnecessary stations (cost in time and money).

On the other hand, the route 94 bus (named for I-94) brings one from 6th and Hennepin to Union Station in less than 30 minutes. My colleagues who (force themselves) to ride Green Line love it but hate it. It’s still very eerily empty all hours, when in the past, the 16 bus was known to be full throughout the day. Mode shift has shifted people away.

To consider the life of a transit user then is to imagine someone who is subjected to constant struggle to move about in a timely and efficient manner. And at times, to have one’s needs ignored by policymakers.

Another element of using transit is the ability to carry possessions around. I imagine backpack and bag makers crunch each day how to design bags to be sturdy yet light weight, and what environmental issues will luggers encounter. So when one is faced with filthy transit stations and vehicles, one wonders what risk to health if they place their bag on the ground. The alternative is to place the bag upon one’s lap, sometimes taking up maneuverable space for others. And standing in a packed car with a hefty load, it’s only polite to place it on the ground. In some cities with “dirty” climates, this is unavoidable like in Chicago (Gripes about dirty rail cars rise as mercury drops by @jhilkevitch).

Transit as Your Home

A colleague of mine who works transit operations indicates most agencies, at minimum, do one cleaning a day with only emergency mid-day cleanups. The quality of this clean is most definitely not sufficient — to save costs, it was one mop bucket for the entire bus. This is even if they mop at all, the FTA has a report Transit Bus Service Line and Cleaning Functions that indicates 64 percent of responding agencies still use hand sweeping to clean buses for dust. Light rail systems tend to fare better, being given larger operational budgets since stations must also be maintained. But with old school light rail agencies like Muni, its almost impossible to keep up with the grime embedded into its 1997 Breda LRV floors.

Yet we see systems like New York’s subway, Hong Kong’s MTR, and London’s underground which carry substantially more passengers, able to keep up. People often say underfunded agencies simply cannot fund cleaning budgets, but cleanliness didn’t happen with a mop, it happens on a multi-level organizational level which builds these costs into the lifetime of the cars.

Still the lonely transit user doesn’t have much a say, other than some days to think if they had a mop or spray bottle, they’d simply wipe up that bit of grime missed by the cleaners.

The feeling is, if we are to embark on this transit first initiative, we have to consider riders as ordinary people who have needs. We also have to consider that current paradigms failing transit planning and operation are still there and will be there in the future. Now’s the time to break them to make people first.