It’s clear that ride-sharing’s reputation has been rather tarnished by public policy backlashes this year, but this hasn’t diminished its popularity.

In my view, I see Uber and Lyft as technology companies in the same vein as freeways, railroads, steamships, and jumbo jets that heralded new eras of transportation.

But hold on you say, it’s just an app that tells someone to pick you up. The car already exists. The app is just an on-demand ride board. You need a cell phone. It’s VC smoke and mirrors! It all seems like a fad until we look at history.

Before railroads, people floated a wooden barge down a river or drove horses down dirt roads. Then someone invented a steam engine and a better steel track. Before cars, people walked, biked or galloped on a horse. Then a series of inventors fiddled with putting an engine in a carriage. Before freeways, people drove hours on whatever road led to the city center. Then engineers envisioned massive segregated speeding roadways. 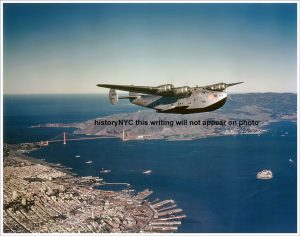 Pan Am Clipper over San Francisco in 1942. Read more about Clipper planes

Prior to the advent of these transportation eras, it must have seemed bizarre to ask if people thought of a faster more ingenious way to get around. For example, trying to explain riding in a flying aluminum shell powered by windmills taking you half-way across the world in less than day.

But what seem like overnight revolutions are actually incremental enhancements or combinations of existing ideas, not very unlike a little app that connects drivers and riders together.

These tech companies are not the ultimate pioneers though, we are. We think of transportation as being “created” by someone but in reality the adoption of any tool or vehicle into a main mode of human transportation requires users. Uber’s explosion and disruption results from millions using the service en masse, filling travel gaps and trip demands most planners would not know existed.

Take a curious analogy of transportation technology that has experienced great waxes and wanes in popularity, the bicycle. It was invented to replace horses in Europe, quickly dismissed as a toy, became a ubiquitous transportation mode in the United States, and then was left behind in urban renewal. 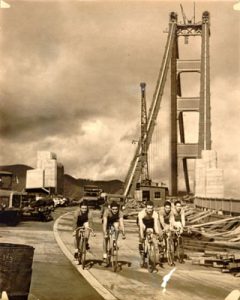 The Bicycle isn’t an app so why does it receive so much opposition. It too is seen as a passing fad and disruptive to existing modes of transport. NIMBYs fill City Council meetings in opposition to bike lanes. Supporters push back on helmet and licensing regulations. Sound familiar?

People Need to Get Around

Our public policy discourse treats Uber and Lyft like segueway tour companies to the annoyance of some locals. But the discussion forgets that real people of all types and ages use the service. If we can talk about transportation in this context, I think we’ll have more meaningful.

People need to get around and are searching for better ways of doing so.

It’s not rocket science that we need fast, convenient and reliable alternative transportation. On-demand bus service has been a difficult effort by transit agencies for a long time now. Uber not only meets all these metrics but makes it easy, accessible and most of all palatable to the masses. What lessons can we learn from empowering local citizens to serve each other.

Transportation is trending to radically change due to the internet.

The internet has always promised a merger of the real and digital world. In Steve Case’s “internet of everything” we will see even more instantaneous interaction across distances. Doesn’t matter if it’s self-driving cars or remote locking bike share, policy makers need to anticipate this forthcoming era, not simply react. Lead officials and staff on roundtables and educational outings. Forging partnerships and understandings will underwrite good policy decisions.

As someone who use to be very car-oriented, detaching oneself from their personal vehicle is sadly a precarious feat. It is a huge step to put ones mobility into the hands of a stranger, and plan out your movements well in advance. It encourages people to mull about urban spaces, not being tied to their car, and potentially look at other options. This gets suburbs off their car diet.

In the words of Marc Andreessen, “software is eating the world,” and we are looking at technology networks heavily influencing or even merging with transportation networks. Ride sharing apps are getting people around, games like Pokemon are getting people outside, let’s leverage these for the public good.