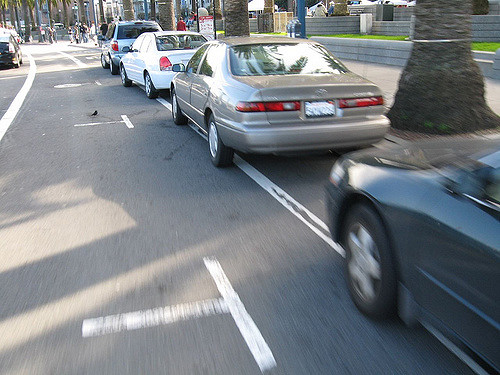 A short lived failed attempt to do off-set parking as a faux bike lane barrier. Via Richard Masoner

Coming from Minneapolis, once crowned by Bicycle magazine as America’s forward-thinking bicycle city, I am a little bit biased when it comes to bicycling infrastructure.   In fact my Master’s capstone team thesis (co-wrote with some lovely planners including @AmbroseManor) was critical on Minneapolis’ testing of bicycle turning boxes–at the time some of the nations’ first federal funding pilot efforts with Portland.  So when I do my typical rounds of the San Francisco bike lanes to see how they progress over time, I continually come to one conclusion:

In high school we’d use whack to describe people, things, and situations.  I think this describes everything about the current system.  It’s badly designed for people, it has bizarre patterns, and it constantly places you in dangerous situations with other traffic.   The problem is, the issues are not isolated, rather they are systemic to the design as a whole.

Here are my critical points in regards to the bicycle system as designed for Market Street to FiDi and then throughout SOMA:

So this is just a general start to formalize what I’ve been telling people.  Even taking 1-2 hours out of your day to riding the system in and out will reveal all these shortcomings.   Of course I haven’t even touched on all the double parked vehicles or confused drivers, but in my opinion all of those issues are just parts of eventual adaptation of all road users to the new system.

My beef with the bike lanes is that the entire system is setup badly.  If you start with a bicycle system foundation like this and tell all the public works engineers, police enforcers, infrastructure contractors, concrete pavers, government officials, non-profit advocates, and regular Joe users, that this is what we got.  Well then it’ll be hard down the road to say, actually, we need to tear it all up and redo it.   Minneapolis went the route of piloting all projects, calling them tests, that was smart, so that they could eventually adapt the best uses at the best locations.  And then duplicate them elsewhere in similar situations so that we’d end up with a very consistent system.

Of course I’ve seen San Francisco prior to bike lanes, I didn’t ride it, but it was certainly car dominated.  In fact San Francisco use to have a campaign of signs to tell people to stop running red lights (which they did in the multiples).   This is still reflected in the recent campaign “What’s the Rush?”  So perhaps waving my arms around about a rather scary bike lane system is not productive since sans any kind of bike lane, San Francisco streets would just be downright dangerous for everyone.   Still I was taught to be critical about the investments we make since the Public pays for it in the end, and we should be even holding the “nice things” accountable.