Soft Planning or Lipstick on a Pig

I often think of city planning as composed of “hard” and “soft” approaches which shape and define land use and design.  Hard planning consists of real shit like height limits, density, setbacks, and parking.  These physical, sharp, and poignant zoning rules shape the final form of building and land.   The visual effect and experience on users and on history is lasting and profound.

And then there’s soft planning, or as I think of it, lipstick on a pig.

Soft planning are requirements which are aesthetic and reflect subjective tastes.   They’re superficial, brushed on, and act to muddle the physical design.   People are to be delightfully distracted by these frivolities.   These requirements exist in a legal gray area and are often tacked on at the end of a conditional use permit.   Yet many of these will not stand the test of time, and will ultimately change.

Here is my critique of 5 soft planning requirements: 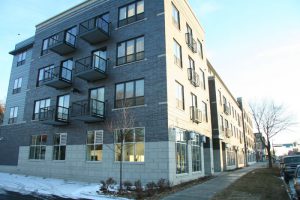 Greenleaf Apartments in Minneapolis, that solitary tree won’t last very long. Focus on the boulevard instead.

We want our cities to be beautiful lush livable places but tiny islands of trees and bushes adds questionable value.  “Nature” can’t be defined by a minimum number of tree species or flowering plants. It takes a collective city-wide approach that is consistent to establish a true green city.  Pine hedges of the late-20th century sit sad and dilapidated in concrete parks. I’ve seen poor cedar trees in modern plazas where the intense reflection of architectural glass has blistered them. Landscaping becomes an architectural contrivance and a bandaid.  Boutique parks like Portland’s Tanner Springs Park and Patrick Blanc’s vertical gardens might be the better future approach to increasing urban ecology.  Also, cities need to stop forcing solitary trees to be planted when it should be maintaining a true urban oasis of street trees like the fat Public Works of yesteryear. 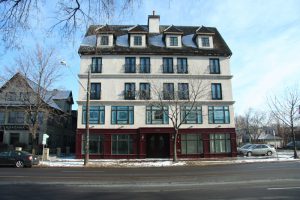 The developers of Le Parisien touted high-class materials but all we have is mindless white stucco with a ground-level painted wood facade that didn’t last MN’s brutal winters.

Make it a lighter shade of beige, no not too beige, okay let’s go back to brown, but more like sandy tan than wood.   Construction paint suppliers must laugh at the number of white-tan-brown shades they must produce to appease architects who are constrained by planning departments and developers who fear backlash at anything too splashy.  The original builders of American cities used real stone and brick which created the expectation of appropriate color choices today.  Then brutalist concrete architecture created today’s backlash against letting materials show their “natural” color.  Material manufacturers don’t even bother to develop different hues of products because they ultimately know it will be painted over.   Painted aluminum panels, why not.  As a result many downtown developers are opting for beautiful but characterless glass curtains. 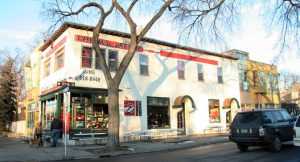 Bob’s Java Hut has a fun collection of all sorts of signs, protruding, murals, posters, and side-mounted.

Granted signage was horrid in the early automobile era and that are left with their vestiges today, the concept of signage and in turn, advertisement, is inherent to a viable city.  People will avoid areas that don’t offer assurances of “something there.”  If we want to promote pedestrian use, we have to speak to pedestrians and that requires perhaps more urban information than is often allowed in square inch limitations.   Cities have to be proactive about the signage environment that will exist, not simply layout punitive rules to doom retail aspirations.    Enabling commercial districts to form collective signage, street banners, and other forms of visual street information is a great way to augment and assuage this typically case-by-case zoning model. 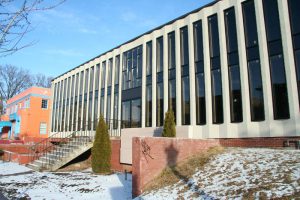 Need more windows? Be careful what you wish for.

Fenestration is a fancy word for describing how many windows you have.  The idea in New Urbanism and Jane Jacob’s “eyes on the street” is that you need a minimum amount of transparency from the building to the street.   The irony is humans like privacy and developing on small urban lots gives you less ability to have windows in which you can see out without worry that people can see in.  Even after you have a plethora of bay windows facing the street, if you’re covering one with blinds around the clock, you can actually get fined if it violates this condition.   Architects have smartly bridged the gap by doing glass curtain walls with treatments that “smoke” out the opacity.  With just the right setback and angle, you have a foreboding facade of glass that meets transparency requirements. 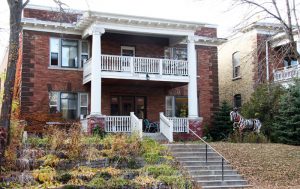 Tall grass and weeds are a public nuisance, that will kill you. Ok maybe kill your eyes at the sight of an ugly yard! In today’s landscape movement toward native and drought-tolerant species, there is no reason cities should be punitive in old ideas of green lawns and one-inch grass.   Ordinances like these are still prevalent in urban cities and suburbs alike.  There are some valid reasons, for example dry areas have fire concerns with brush, and insane overgrown landscapes make buildings impassable. Cities need to instead steer residents towards sustainable lawns if they’re not willing to put up with maintenance.  And in general this American ideal of green lawns needs to seriously die.